What is the fallout from last week's Biden run to Saudi Arabia and the "Fist Bump that will live on in infamy"? 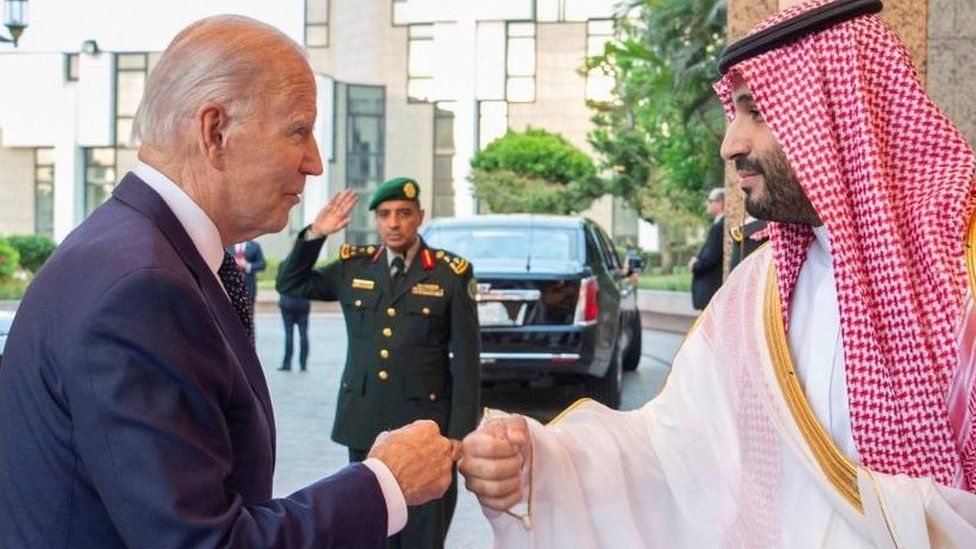 FDR's speech the day after Pearl Harbor was attacked had one of the most memorable presidential lines recorded: "Yesterday, December 7, 1941-a date which will live in infamy…". In contrast, Biden's trip to Saudi Arabia last week was anything but an incredible moment in history.

The fact that the Biden Presidency has surpassed all of Jimmy Carter's incredible devastation to the country and its economy is nothing short of horrific. I have talked about several ways the administration could hit inflation hard and give some relief to consumers at the pump, such as how lifting some regulations regarding biodiesel and filing a wartime exemption on the Jones Act would have a quick and significant impact.

Not to mention how when combining easing biodiesel and ethanol regulations, you would save more than $2.00 at the pump, which is a significant statement to consumers. The negative impact on the environment could be minimalized, and the economy would have a major bump.

The Biden Administration's war on oil and gas has had a major impact on the crimpling of the U.S. economy. When combined with the continual printing of money, you get the 9.1% inflation we are now facing. I am not sure even  economists know how high the inflation rate will get before it can be reined in. Many economists are now speculating that there may not be any chance of a soft landing and the recession could look as bad as Biden's polls.

Last week on the trip to Saudi Arabia, Biden's staff thought it would be a good idea to have a fist bump picture and that it wouldn't hurt to get that photo with Crown Prince Mohammed bin Salman. They even had the president practice the first bump in Israel to get the idea and give him some practice.

The worldwide media took real notice and started thinking about one of the great lines from The Princess Bride: "Humiliations Galore". Everyone then wanted to see the fateful "Fist Bump" with the prince. The day came, and we were not disappointed. Our president performed the presidential fist bump with grace, dignity, and a great photo op.

He then proceeded to go through the receiving line of all of the Saudi leaders, fist bumping the entire way down the line. When you watch the line, you can see the leaders that had been bumped laughing and pointing at our president and laughing harder.

Aljazeera and many other Arab publications ran with the story of the hypocrisy of the United States calling them a "pariah" state, yet they came to the Middle East to beg for oil.

After the meetings, President Biden had a press conference and said that he had discussed the killing of journalist Jamal Khashoggi. That was countered by multiple sources saying they heard nothing of the topic come up in conversations.

Printed in Aljazeera on the 17th, ;

Biden, who visited Saudi Arabia, Israel and the occupied West Bank in his first trip to the region as US president, previously told reporters he brought up Khashoggi's killing at the top of his initial meeting with the Saudi crown prince.

He said he "indicated" to MBS that he held him "personally responsible" for the 2018 killing. He added that MBS repeatedly denied responsibility during their meeting.

In the same article: "I didn't hear that particular phrase," al-Jubeir told Fox News correspondent Alex Hogan in an interview on Saturday.

Biden has created the oil war against the U.S. oil companies, and now economists and even democrat strategists are realizing the current energy plans need to change to have any chance of curbing inflation. Not only has the war been created, but it has also escalated at every turn by the Biden administration.

Scheduling the Big Oil CEOs to the White House and then standing them up only to have a meeting with renewable energy companies was not as bad as the trip last week, but it was another confirmation of the administration's disdain for American energy companies.

Last week was an insult to the American people and an international blunder of a significant scale. The Arab world is pulling away from the United States and moving closer to Russia, China, and even Iran. Lying about the Saudi Crown Prince in their culture was an extremely important affront.

The administration is claiming a victory lap with the new investments into renewable energy with Saudi Arabia. Let me remind you about the Saudi budget. They budgeted for an average of $120 in oil in 2022. With that budget, they paid back the $95 billion they got from the Saudi Aramco debt incurred to pay for the Saudi social programs. They also are funding some of the most aggressive renewable energy programs in the world through the high oil prices.

So why are we funding renewable energy projects in Saudi Arabia when we are facing historical inflation, and high gasoline and diesel prices?

While today's article may seem like a rant, it is meant to be a discussion of the great awakening that is happening around the world.

People all over the world are realizing that we need all types of energy to deliver low-cost, sustainable energy to everyone, regardless of income or station in life. That also includes the realization that we have been sold a bill of goods on renewable as a sole source of energy.

Last year I published that our research was showing that the further we went down the renewable energy path, we would need more fossil fuels. There is a lot of data that goes into that statement, but it has worked out to be true.

The CEOs of Big Oil have stood up to the beating, I mean testifying, from congress and said they will produce more while giving returns to their investors. Our U.S. oil and gas men and women stand ready to turn this country's energy problems around.

Like a police K-9, just let the leash off and we will solve the problem. Until then, we are still providing the lowest cost energy with the least impact on the environment /when compared to any other country in the world.

So next time someone tries to "Fist Bump" you, shake their hand. Being reminded of the "Fist Bump that will live in infamy" is not a good memory.