How do the mixed signals on energy from the current administration sent to the world, oil and gas executives, and U.S. citizens impact prices at the pump? 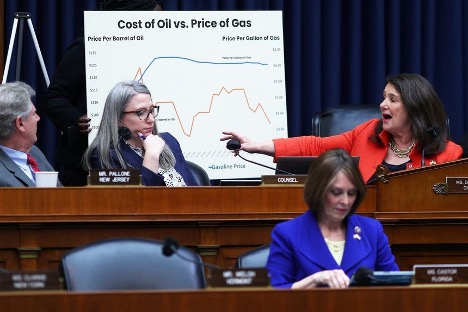 We are living in a frightening time with geopolitical wars, mixed signals from our current administration, and the total lack of conviction in the oil and gas market to increase CapEx for production programs. Let’s take look at some of the current and past events and the actions of this administration that are at the forefront of these discussions.

President Obama’s attendance at the White House press function covering health care this week reaffirmed what has been generally accepted that the Biden administration has been an extension of the Obama administration’s policies.

Under the Obama administration, strict regulation increased, and committed the United States to the Paris Climate Agreement was critical in starting the ESG movement for investing. While the Paris agreement and ESG investing are not bad and are fantastic conceptually. Environmental, Social, and Governance are made up of the three critical components. It is the balancing between taking care of our environment, and stakeholders and bringing low-cost energy to everyone that adds to the complex discussion. Giving value to our investors is just one of the critical cultural values in the King Operating Corporation while practicing the best-known methods to meet or exceed ESG standards.

In my opinion, the path to Carbon Net-Zero is critical and we need to get there, but not for the sake of total a world recession or trying to implement renewable energy before the technology will allow for environmentally safe and a definable ROI. We are in a world energy crisis that will impact everyone in the long run, and it will be a tough recovery.

Biden started the current administration’s demise of the United States energy sector to ramp production while on the campaign trail. While reviewing some of the campaign promises like “we will end all fracking” and committing to support the Green New Deal all the way through the total decimation of the oil and gas companies. The undying loyalty to “Greener” policies has been only to support the liberal base.

The cancellation of the Keystone pipeline on the first day of President Biden’s presidency was a critical statement to the oil companies and ESG investors. The pipeline cancellation was a political offering to the liberal voting base and the oil companies heard from their investors to return profits in months rather than years. The mix of the administration’s public statements, actions, and having to “Walk Back” statements from the office of the president are 100% for the lack of commitment for the oil and gas companies to commit to increased drilling programs.

Yesterday’s grilling on capitol hill of Exxon Mobil, Chevron, Pioneer Natural Resources, BP, Shell, and Devon Energy was absolutely nothing more than a political stunt to pacify voters and demonstrate the political leaders’ lack of how the energy markets work. Most of which are outside of the oil company’s ability to impact, with the exception of shareholder returns through strong management practices.

Published this morning in the Wall Street Journal today were several key points:

Democrats also said the oil executives were giving priority to payouts to their shareholders over reinvesting in oil production.

They cited a survey last month from the Federal Reserve Bank of Dallas, in which half of the big companies that responded said they didn’t intend to increase output by more than 5% this year despite higher oil prices. Most respondents cited investor pressure as the top factor limiting their growth.

Several of the best quotes from oil companies’ executives are:

“We do not control the price of crude oil or natural gas, nor of refined products like gasoline and diesel fuel,” Chevron CEO Mike Wirth said. “And we have no tolerance for price gouging.”

“It is experiencing severe cost inflation, a labor shortage due to three downturns in 12 years, shortages of drilling rigs, frack fleets, frack sand, steel pipe and other equipment and materials,” said Scott Sheffield, chief executive of Pioneer Natural Resources Co., one of the largest U.S. independent oil and gas producers.

“We think we can return value to our shareholders, as well as increase production, as well as invest for the future in renewables, low- and no-carbon fuels for our customers,” said Gretchen Watkins, president of Shell USA Inc. “We will be doing all of that.”

Some of the questions or statements from congress are:

Rep. Frank Pallone (D., N.J.), chairman of the full Energy and Commerce Committee, said “Now that’s a lot of money to shareholders but it’s coming at the expense of the American people, who need you to dramatically increase production, not shareholder wealth,”

“Now it’s time for Congress to alleviate the pain many Americans are feeling at the pump,” said Rep. Diana DeGette (D., Colo.). “We have the capacity right now. The reason why your companies aren’t doing it, as you freely and honestly admitted, is because you’re looking at your shareholder profits.”

We are in a very tough period in time. The oil and gas companies in the United States are much like the “in-betweeners”. Those families that have elderly parents and kids that they are responsible for.

The oil and gas companies have demonstrated their commitment to their stakeholders with massive returns, and their fear of wildly implemented regulations that can be executed by a stroke of the pen without congressional approval.

President Biden committed to the EU that the United States will come to the rescue with LNG exports from our fantastic oil and gas companies, while congress barbeques the executives as a political stunt, and hold the line on no new permits and more commitments to destroy the oil and gas industry – ALL IN A TWO-WEEK PERIOD.

As an oilman and CEO of an E&P corporation, my commitment runs deep to producing low-cost energy for my country, while providing strong returns for my shareholders, practicing best practices to take care of the environment, and maintaining the supporting corporate culture.

The price at the pump is determined by the retailers, and the price of oil is a complex world pricing matrix that is dramatically impacted by geopolitical issues and the past and present U.S. administrations to put a toe tag on the oil and gas industry.

When people try to lay blame on everyone but themselves it only makes the problems worse. We must have solutions and talk to each other. I have tasked my team to come up with solutions for the industry that are achievable.

So, getting used to high gasoline prices as the key market influencing factors started even before the Obama era and has been solidified by the current administration.

The oil and gas executives are the only ones trying to do the right thing at the right time for everyone. And that is impossible.